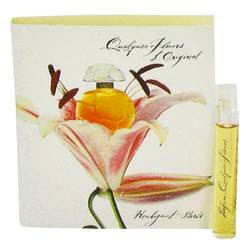 Quelques Fleurs, the renowned French perfume, that began with just a basket of flowers; I remember it well! As my chic aunt Victorine passed through a room I knew that she had been there as the scent of Quelques Fleurs left its indelible imprint on the aroma that lingered long after she had departed for an excursion to town. It was her signature perfume and later it became mine as well.

LEGENDARY PERFUME Quelques Fleurs, L’Original was created by the House of Houbigant, founded in Paris, France in 1775 by the renowned French perfumer, Jean-Francois Houbigant of Grasse. It is one of the most renowned classics of all time; the perfume that changed all flower fragrances forever. As the name implies Quelques Fleurs (Some Flowers) was the first true multi-floral bouquet, which established a completely new fragrance classification. Up to that time, floral fragrances had been mostly single flowers or were blended with herbs and other essences.

THE ESSENCE OF PERFECTION Quelques Fleurs is a fresh, floral aromatic perfume that is imbued with the subtle yet soft scent that is forever young at heart. It is fashioned from the highest quality and costliest natural aromatic and absolute oils and is still made in Grasse, where it was created in 1912. The “nose” behind this fragrance was Robert Bienaime. Top notes include orange blossom, green notes tarragon, bergamot, lemon and citruses; middle notes include carnation, tuberose, orchid, lilac, jasmine, lily-of-valley, rose, violet and iris and base notes include amber, must, honey and vanilla. The Genealogy of Perfumes cites Quelques Fleurs as a landmark innovation that established a totally new fragrance classification and influenced other compositions for years afterward, including many of today’s important fragrances.

THE HOUSE OF HOUBIGANT The House of Houbigant was the perfumer to the royal courts of Europe and found favor with royalty and nobility including Napoleon and Josephine Bonaparte, Emperor and Empress of France, Queen Victoria of England and Czar Alexander III of Russia. Not so lucky was a Marie Antoinette, Queen of France and wife of King Louis XVI. Houbigant legend has it that when Marie Antoinette was fleeing to Varennes to escape the French revolutionaries she was recognized as royalty because of her Houbigant perfume, which only royalty could afford.

QUELQUE FLEURS ROYALE Houbigant Paris, 1908 is based upon a formula originally created in 1829 for Princess Adelaide D’Orleans, Queen Mother of France. It begins with buoyant, contemporary citric and fruit notes, followed by a rich, warm floral heart accented with acacia honey, lingering with a sensual base of wood, amber and musk. Quelques Fleurs Royale is made in Grasse, where Jean-Francois created his first perfumes in 1775.

HOUBIGANT HISTORY Jean-Francois Houbigant of Grasse (1752-1807), originally sold gloves, perfumes and bridal bouquets. The original shop, called “A la Corbeille de Fleurs”, was in the rue du Faubourg Saint-Honore. In 1882, the House launched Fougere Royale, a new fragrance family. It was the first “fougere” (or fern-like) perfume ever created, establishing a completely new fragrance family, which still remains today the most popular family in men’s fragrances. The formula completely revolutionized the world of perfumes and established modern perfumery as it exists today.

QUELQUES FLEURS!!! There is nothing as exquisite as a classic that endures. Houbigant perfumes are sold at most upscale department stores.