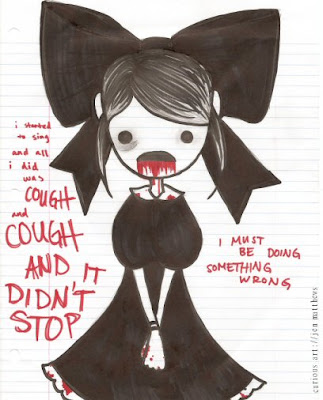 This is the season when coughing and even minor coughs can make the holidays not so pleasant to look forward to. At first one resorts to taking commercial cough drops, which are largely herbal and some contain honey. Although cough drops provide some relief, that’s only suitable for common, uncomplicated coughs. When the cough takes on a life its own and over-the-counter prescriptions fail to tame more persistent coughs, after one week it is time to take steps to curtail further development of a more serious condition. At this point of advanced coughing a visit to the doctor may be the solution to obtain a more potent remedy. Or you could consider the holistic approach and chose one of Edgar Cayce’s remedies which he prescribed in one of his readings for a cough that was hanging on.
MISSING THE HOLIDAYS
At this time of the year missed time at work and school , or taking to one’s bed during the holidays does not make for a happy outlook. Since prevention is the key consider this: throughout the Cayce readings several formulas were given for cough syrup. Simply called Cough Mixture 2, this formula was recommended as a cough medicine and for healing through the whole system. Prepare as follows: Put 2 ounces of strained pure honey in 2 ounces of water and let this come to a boil. Skim off the refuse, then add 1 ounce of Grain Alcohol. To this add the following in the order as follows: Syrup of Cherry Bark-1 ounce, Syrup of Horehound-1/2 ounce, Syrup of Rhubarb-1/2 ounce and Elixir of Wild Ginger-1/2 ounce. Shake well before the dose is taken, which would be about a teaspoonful taken as every hour. It will allay the cough, heal those disturbing forces through the bronchi and larynx, and make for better conditions through the eliminations. (243-29)
HERBAL RESPIRATORY TONIC
The great advantage of this formula is that it does not produce side effects and may be taken as often as once every hour until relief is obtained. So you may rightfully ask, “Where am I going to find these ingredients? No you will not have to go out and remove the bark from the north side of a wild cherry tree to produce the formula or scrounge around for the other ingredients. The holistic product is called Respicol which is available at the A.R.E. Edgar Cayce New York Center’s store at 246 W. 30th St. or call 212.691.7690. Cayce products are also available at www.baar.com or 800-269-2502.
TAMING THE MALE COUGH
When an adult male has a cough you may more easily entice him with holistic cough medicine that contains rye whiskey. Simply called Cough Mixture 3 this Cayce formula is an aid for cough and cold, and for assistance in expectoration. It should be taken three to four times a day, or at night when there is the tendency for spasms of coughing. The Cayce formula is as follows. Dissolve 1 ounce of Rock Candy, as a syrup, in a pint of good rye whiskey and add the Syrup of Horebound-1/2 ounce, Glycerine-10 drops, and Elixir of Lactated Pepsin-10 drops. Shake this well together before the dose is taken. (303-25) this remedy may also appeal to women who can tolerate the whiskey.
SOUND ADVICE. MOST IMPORTANT: BE SURE TO TAKE COUGH REMEDIES AS SOON AS THE COUGH ACTS UP. IF THE COUGH IS PERSISTENT CONSULT YOUR DOCTOR.
Posted by Polly Guerin at 7:56 AM