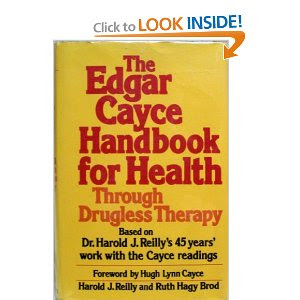 As the saying goes, “You are what you eat.” Edgar Cayce, the great American prophet preferred natural food over man-made sources of vitamins. In the book, "The Edgar Cayce Handbook for Health," Cayce occasionally did prescribe extra vitamins in certain cases but he warned that these should not be continued indefinitely. He also advised that we opt out of eating frozen food and taking supplements and instead purchase vegetables and fruits “in season.” Fresh food markets have cropped up all over the city and the foods represented in these markets come from local farmers when fruits and vegetables are at their peak of freshness and nutritional value. Cayce further advised that you have at least one meal each day that includes a quantity of raw vegetables, such as cabbage, lettuce, celery, carrots and onions. Tomatoes he said, “May be used in their season.”
A GOOD CUP OF COFFEE
Americans love drinking coffee. I for one cannot begin the day without a cup of fresh percolated coffee. If you’re like me one or two cups in the morning will satisfy my devotion to coffee. However, Cayce felt strongly about coffee, which he suggested was a food when taken alone, but should never be taken with milk or cream and sugar, since the milk transforms itself into leathery curd blocking the digestive process. He said, “If coffee is taken, do not take milk in same. If tea is taken, do not take milk in same. This is hard on the digestion. (5097-1)
AN ALMOND A DAY
Cayce was also enthusiastic about almonds, and so am I. He said, “If an almond is taken each day and kept up, you’ll never have accumulations of tumors or such conditions through the body. An almond a day is much more in accord with keeping the doctor away, especially from certain types of doctors, than the apple. For the apples was the fall, not the almond—for the almond blossomed when everything else died. Remember all this is life! (3180-3) He further recommended that those who would eat two or three almonds each day need never fear cancer. And those who would take a peanut oil rub each week need never fear arthritis. (1158-31).
BEWARE OF FRIED FOODS
Cayce was strongly opposed to fried foods and excessive consumption of fats. He warned, “Beware of all fried foods, No fried potatoes, fried meats, fried steaks, fried fish, or anything of that nature.” (926-1) He suggested that you consider steam pressure for cooking food quickly because it rather preserves than destroys precious vitamins. Chicken or fish would be better steam cooked as well.
HEALTHY NATURALS AND NUTTY SOLUTIONS ARE SO EASY TO FOLLOW AND PROVIDE LIFE EXPANDING BENEFITS.
Posted by Polly Guerin at 9:12 AM