THE MYTH OF PEARLY WHITE TEETH 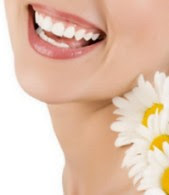 THE MYTH OF PEARLY WHITE TEETH ©
by Polly Guerin

It is rather distracting to look at a person and see that they evidently have become victim to the myth that pearly chalk-like teeth are the key to a youthful appearance. Such obvious whiteness is not natural. Instead teeth should blend with your skin tone. I remember an anchor woman on one of the popular television channels whose teeth were so startling white that it was difficult to look at her or concentrate on what she was saying. Not too long after several viewings she was taken off the air. Perhaps it was the shock effect of her unnaturally white teeth that caused the distraction. Who knows? But if whiter teeth are your goal always seek the advice of a reputable dentist.
GOOD ORAL HYGIENE
We’ve all been advised by our dentist to brush and floss our teeth in the morning and before retiring. However, instead of concentrating on the surface of the teeth in order to control the growth of plaque which causes gum disease, choose a soft toothbrush that will brush both the teeth and the gums at the same time. The wide selection of plaque-fighting and anti-cavity toothpastes and mouthwash products will further aide your health regime. Dentists’ recommend that you have your teeth cleaned and examined at least every six months and at that time the best treatment to fight plague buildup will be discussed. Severe cases can result in periodontal disease, but treatments are readily available to save your teeth. When Edgar Cayce, the father of modern holistic medicine, who produced a tremendous legacy of health information all based on natural ingredients was asked, “What is the best procedure for care of teeth?” His answer was quite simple, “Have local attention and then take care of the teeth. Use an equal combination of sale and soda for massaging the gums and teeth. Don’t use a brush (for massaging). Use your finger. (3484-1).
PREVENTING TOOTH DECAY
It can be a lifelong struggle to keep your teeth healthy, but without your teeth what is the solution? Dentures? Cayce had some original ideas about teeth. A concerned person inquired, “What can I do to keep my teeth for life? Quite emphatically Cayce replied, “You won’t! For already these have begun to need local attention. If there is kept a proper balance in the vitamins, it will help---but these precautions should begin---well, during the period of gestation is when they should begin, but for a body should begin in the first or second year.” (3436-1) Alas it is obvious that maintaining good health must begin in early childhood abetted by good nutrition with the increased ingestion of calcium-rich foods, particularly vegetables and seeds. Further explaining Cayce was presented with another question. “How to prevent tooth decay. (which I have had an awful lot of the past three years)?” Cayce recommended, “Have them attended to, and add to the system occasionally Atomidine as a manner of gaining better control of the activity of the glands which formulate the circulation through teeth and structural portion of the body. One drop 5 days at a time, and then skip 2 weeks. Then again do this for a whole year, you’ll have your teeth in very good fix if local attention is given to the rests. (5313-4) (Atomidine is available at the Edgar Cayce New York Center http://www.arenyc.org.) TOOTHACHES BE GONE
Woe to anyone who has a toothache. Though there are commercial products to address this painful issue the following remedy is of interest. Drawn from the work of Edgar Cayce the information that he was provided in one of his trances included a formula and the name for a preparation called Ipsab, which was recommended by Cayce for toothaches, gum problems, bleeding gums and canker sores. If you are adventurous and a purest you could try making Ipsab yourself. The principal ingredient is Prickly Ash Bark, which the Indians called “toothache bark” and to which Cayce referred in the same manner. In one reading he gave this formula: To 6 ounces of distilled water, add two ounces of Prickly Ash Bark. Reduce by simmering (not boiling) to 2 ounces. Strain and add powdered common salt until we have a very thin past. Rinse or rub gums with this once every 2 days until this trouble in the mouth and gums has subsided. (4436-2) For those of us who cannot readily find Prickly Ash Bark, the product Ipsab is available through health store retail outlets and, of course, at the Edgar Cayce New York Center.
A BEAUTIFUL SMILE
I recently met a young woman who seemed to glow. Her subtle smile illuminated her face and I wondered how she managed to keep up such a pleasant appearance. As Cayce said, “It’s the mind.” Yes, indeed a beautiful smile comes from deep within our thoughts but an unattractive set of teeth or gums can dull the impression of a beautiful smile. So a few words to the wise, always consult with your dentist, but know that there are dental treatments to maintain healthy teeth and keep you smiling throughout your life.
Posted by Polly Guerin at 8:42 AM